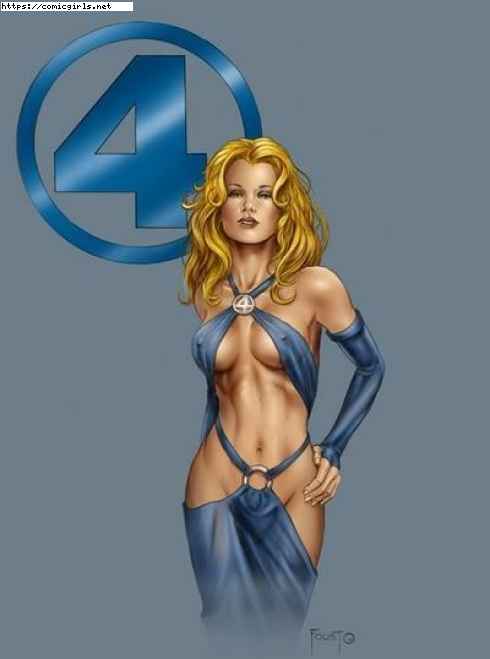 Susan Storm Richards (also known as Invisible Girl and later, Invisible Woman) is a fictional character, a Marvel Comics superheroine created by writer Stan Lee and artist/co-writer Jack Kirby. The character first appeared in Fantastic Four #1 in November 1961, and was the first female superhero created by Marvel in the Silver Age of Comics. Like the other founding members of the Fantastic Four, Sue received her powers after being exposed to a cosmic storm. Her primary power deals with light waves, allowing her to render herself and others invisible. However, she can also project powerful fields of invisible psionic energy which she uses for a variety of offensive and defensive effects. Sue plays a central role in the lives of her brother, her husband, her children (Franklin Richards and Val Richards), and her friend, Ben Grimm.

An object of infatuation for Doctor Doom, and, most notably, Namor the Sub-Mariner, Sue's passive invisibility power translated into her frequent deployment as a damsel in distress during the team's early adventures. However, upon developing the ability to project powerful fields of energy, Sue Storm became a more powerful member of the Fantastic Four, and the team's second-in-command. While Sue operated somewhat in the shadow of her hot-headed brother, Johnny Storm, and her brilliant husband Reed Richards in the early years, she is now the soul of the Fantastic Four and one of the premiere heroes in the Marvel Universe.

The Invisible Woman is portrayed by Jessica Alba in the 2005 film Fantastic Four and its 2007 sequel, Fantastic Four: Rise of the Silver Surfer.
Source: wikipedia.org